The Story of Conn in the world of Phoenix

Understand the request-response lifecycle of a single Phoenix page request.

About a decade ago, when I was doing Drupal consulting, one of my interest was to study the full http request-response cycle of Drupal. Later on, I tried to do a same study for a Rails app. Both of these were incomplete due to the complex nature of the frameworks and of course limited by my knowledge of those frameworks at the point. However, though incomplete, whatever I learned in understanding the request-response life cycle in those frameworks proved very useful for me to understand the framework better and to make best use of it.

Since Elixir and Phoenix are valuing explicitness in code, I thought it would be a comparatively easier task to learn Phoenix request-response cycle. Last week, I sat down to study it with great success (albeit with a little struggle in understanding metaprogramming code in the framework) and in this post I am going to walk through the lessons learned. The entire study can be summarized as a quest to answer the following three broad questions:

What are you going to learn?

Before I jump in, here is what I am going to tell in practical terms:

Now open up http://localhost:4000/, and you will be greeted with a welcome message. 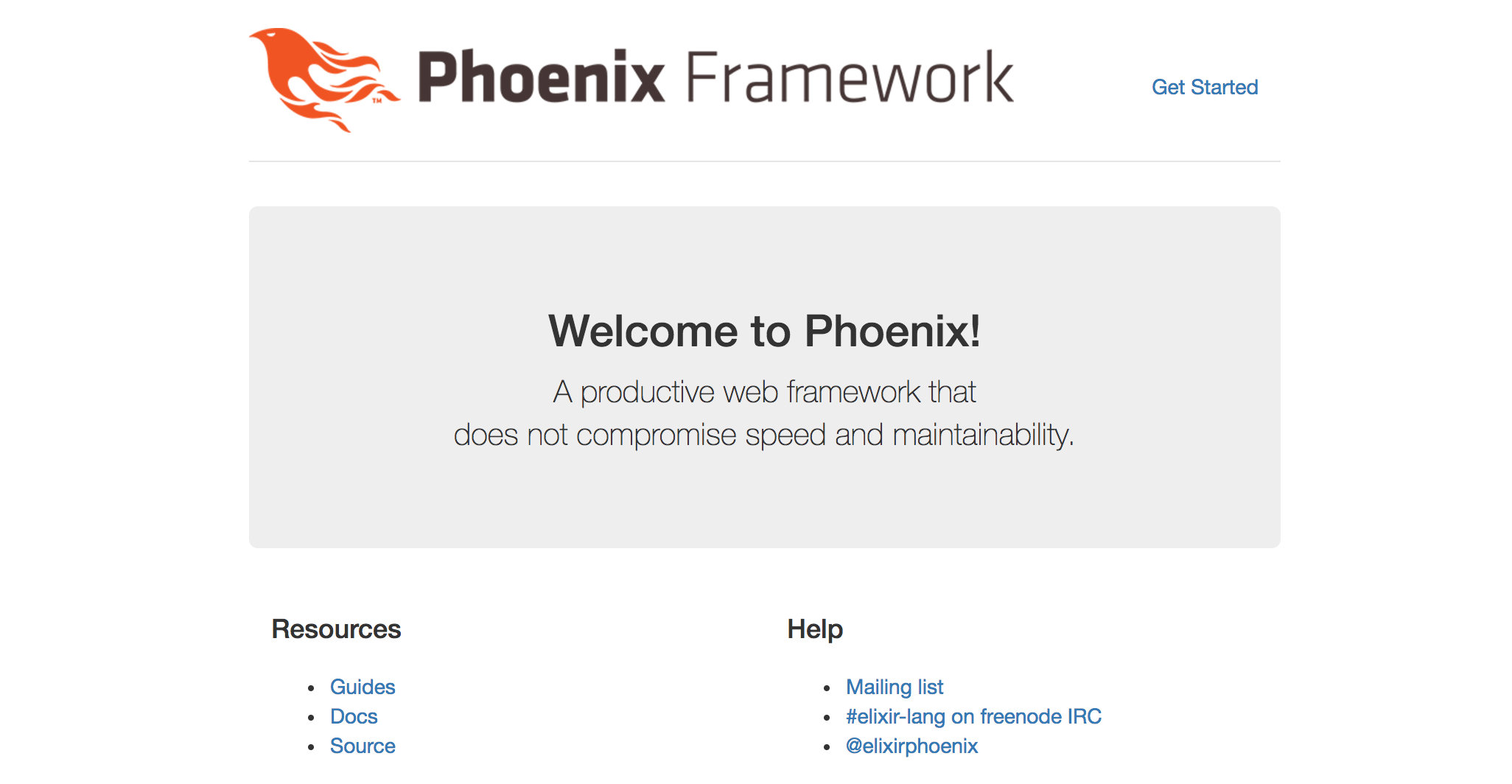 Now the reminder of this post is about what happened from the moment you started your request http://localhost:4000/ to the moment you saw the welcome message on the screen.

Who is it for?

This post dives deep into the terminologies used in Elixir and Phoenix. If you are completely new to Elixir or Phoenix, you might have difficulty following the post. I expect the reader to be someone who has already used Phoenix at least to tinker with, if not used in production.

This post is structured as a story telling. If you played with Phoenix for a bit, you might have seen this conn required in almost all places of your application code. It’s conn in the routes, controllers, views, plugs and @conn in templates. Have you wondered why is this conn all over? Where does it come from? What does it mean? You are not alone.

The conn that I explained above is the protagonist of our story, a mysterious guy who comes into life when you make a request to a phoenix app and dies when the response is sent out. My intention is to enable you to read this post as a story, though it has references to huge code blocks.

This post is going to be long but I promise to make your understanding of internal working on Phoenix better by the end of this post (unless you are José Valim or Chris McCord or Bruce Tate or any one in the core team). With that knowledge, I hope you will truly appreciate how Phoenix works and be a better Phoenix developer.

This story is about Conn, the guy who carries the whole request-response in Phoenix. But like any story, there are many other complex characters and settings that needs to be understood before we full understand who the protagonist is. Let me introduce you to the story setting, and the characters in this story that you will encounter.

This story happens in the world of Phoenix which comprises of two lands:

The land of Erlang - dominated by cryptic yogis with lots of magical powers (called BEAM) who speak the language Erlang which takes years of penance to master.

The land of Elixir - dominated by evolutionary new age yogis who speak the more easily understandable language Elixir but connecting to the same magical power BEAM.

For e.g.., Nginx uses root_path and apache uses DocumentRoot to map the file on disk that can respond to the HTTP request.

Cowboy works differently in the sense, it has no idea of the files on disk. What it cares about is mapping an HTTP request to an erlang module. In the configuration below, it maps every request to MyApp.Cowboy.Handler module.

Take home point is that cowboy needs a module specified as the handler for all request. It’s this property of cowboy that the Plug library exploits for good and enables Phoenix to process requests as it works now.

Genesis - Let there be Phoenix

Now that we have covered most of the basics, we just need to know how to start an Elixir OTP app.

When you give the command

what you are doing is creating an Elixir OTP app. Your phoenix project is just another Elixir OTP app and there by follows the same rules that apply to any OTP app. Explaining what is OTP is yet another story on its own, so if you don’t know what OTP is already, it’s sufficient to know it’s one of the common type of Elixir projects.

When you give the command

what you are actually doing is playing God, blowing down life-giving breath. You just have created a world of Phoenix that is ready to accept any request and give out response. Let’s see how this world starts its life.

Remember, your phoenix project is an Elixir OTP app. So it works exactly like any other OTP app as described below.

Inside your mix.exs file of your phoenix app, there is function called application

This function returns a keyword list with keys :mod and :applications

When you run mix phoenix.server, Elixir starts all the applications listed in the :applications in the order mentioned and then starts the current phoenix project. When we say starting an application, what is actually being done is a call to a function named start in the module given in :mod.

So in our phoenix project, our mix.exs file mentions the module name MyPhoenixApp which is generated automatically when we created our phoenix project. This module defines the required function start. So when we run either iex -S mix or mix phoenix.server this start function gets invoked.

Since our quest is to learn about Conn, we don’t need to look further into Repo supervisor. It’s a supervisor to manage database connections.

Let’s dive into Endpoint supervisor. MyPhoenixApp Endpoint is defined as a module at lib/my_phoenix_app/endpoint.ex and it contains code as below:

MyPhoenixApp.Endpoint is a child supervisor of your MyPhoenixApp supervisor, however you don’t see the required start_link function in Endpoint. How does it work then? Here comes the meta programming magic. The line use Phoenix.Endpoint, otp_app: :my_phoenix_app is a magic spell that does a lot of things in your Endpoint, and one of them is to define a start_link function dynamically with all the worker details your Endpoint needs to monitor.

One of the automatically defined workers for your phoenix app is an embedded ranch supervisor. This supervisor starts Cowboy process listening at port 4000 on localhost and is configured to pass all request to Plug.CowboyHandler.

At this point you brought the world of Phoenix into life, waiting to receive request at port 4000. 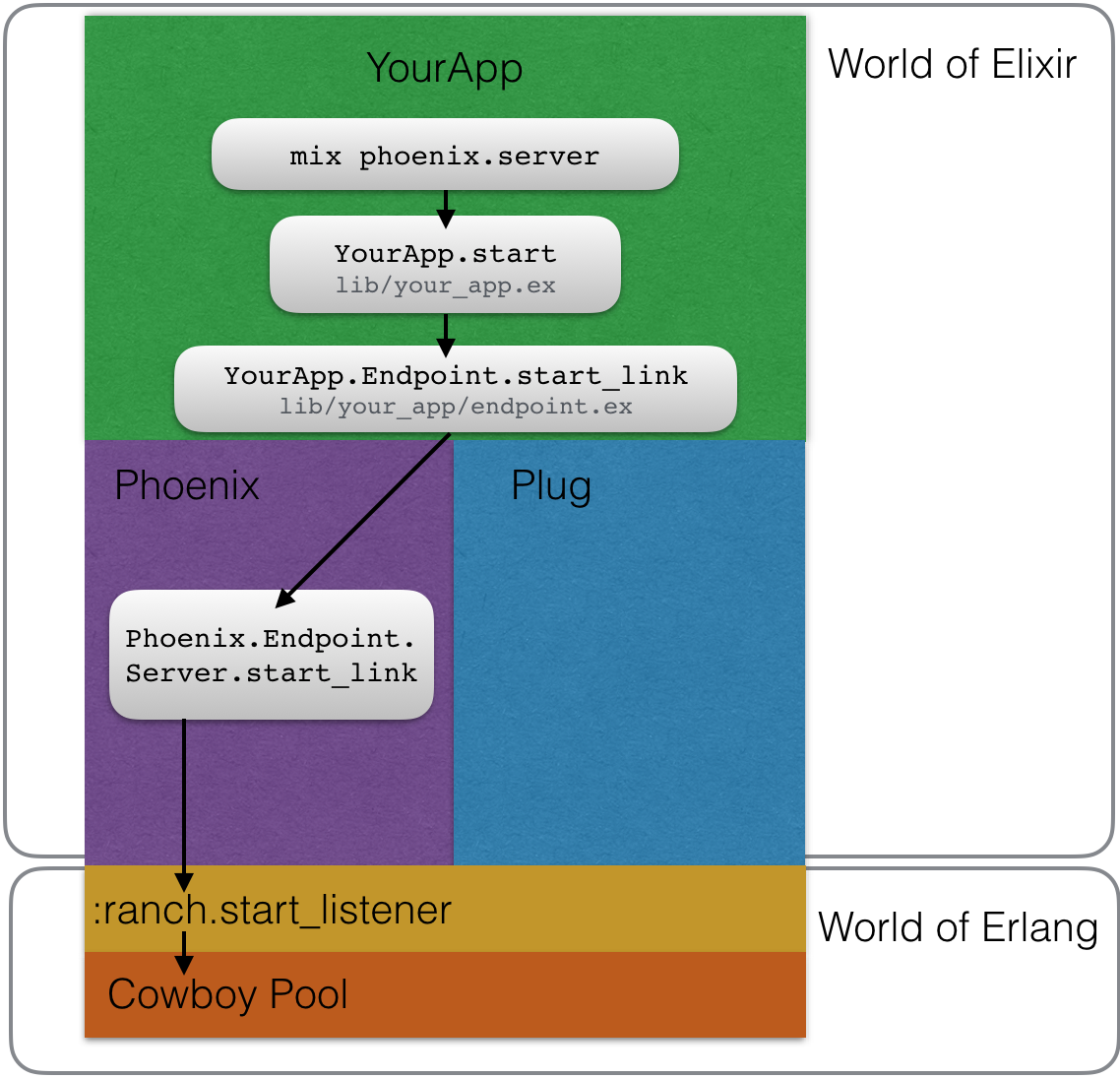 The Story of Conn

When you make a request to http://localhost:4000 in your browser, the sequence of action goes as below:

Life of Conn in the Endpoint

Life of Conn in Router

Let’s look at our MyPhoenixApp.Router

Life of Conn in PageController

Final rituals for our Conn

Function call in the view layer is the last one in our long list of invoked functions from Plug.Adapter.Cowboy.Handler. However, where does the function return this value? To answer that we need to look at how the Plug architecture works. Our first plug call started at Plug.Adapter.Cowboy.Handler as explained in the “Birth of Conn” section above which called Endpoint.call. This call happened from the function that cowboy server triggered when the request originated.

If you are brave enough, you can venture into traversing the above code. It’s actually not so hard as it looks. A simplified version is below:

This is basically saying, if the static plug sets the conn’s :halted key to true value, then don’t do anything. If not, call the next plug function with the new conn.

Due to this nested structure, whichever is the last plug function invoked, the value is returned back to Plug.Adapter.Cowboy.Handler which triggered this nested call. Now the conn struct contains both the request and response information having passed through all layers of your phoenix app, it’s now ready to respond to cowboy request. Plug.Adapter.Cowboy.Handler invokes :cowboy_req.reply/4 with http_status, headers, body, request pulled from the conn struct and that marks the end of our conn struct.

I hope that in this post I have explained what the Phoenix core team members frequently say “it’s plug all the way down” in Phoenix. From the initial call to Endpoint.call it was all calls to plug functions. This I hope helped you to understand the internal working on Phoenix. And as a side effect, I also believe that it will help you to make better decisions on what is possible with Phoenix request cycle and how to intercept the request-response cycle with your own plugs.

I hope that I have contributed towards this goal in this post. If you find any mistake in the post or any section not clear enough, feel free to comment below and I shall try my best to answer every question posted.